Posted by MagicBox in Site Updates on November 10, 2013

It’s been a while since we’ve updated, and we’ve unfortunately missed out on reporting a few upcoming releases. So, let’s get all caught up! 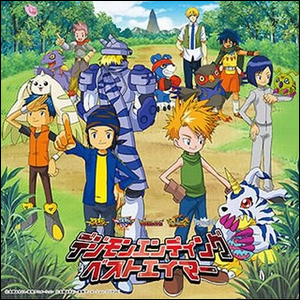 We’ve updated our entry for the new “Digimon Ending Best Aimer” CD, released back on August 01, with coverart, confirmed artists, and a finalized tracklisting. While early rumors declared this release to be a full self-cover album by Ai Maeda, only one song has in fact been re-recorded. Track #11, an “AiM Solo Version” of fan-favorite song “Our Digital World,” is the disc’s only new material, with tracks #01-10 being the original, unaltered ending themes for Digimon Adventure, Digimon Adventure 02, Digimon Tamers, Digimon Frontier, and Digimon Savers. While not comprised of newly-recorded songs like some fans were hoping for, this release now serves as a companion to previous compilation discs like the “Opening Best Spirit” CD and the three “Insert Song Best” albums.

Seemingly in celebration of the franchise’s 15th anniversary, various other DiGiMONMUSiC discs are quietly being reissued at budget prices. The twelve “Best Partner” CD singles were re-released back in September, and we’ll be seeing a re-release of the commemorative “We Love DiGiMONMUSiC” five-disc boxset this Christmas (exactly 11 years since its original release back in 2002).

We’ve updated our listings for these discs with new release dates, catalogue numbers, and Amazon / CD Japan links. I know I’ll definitely be picking up the five-disc boxset, as I missed out on it a decade ago. As always, we’ll be sure to update as more information becomes available!